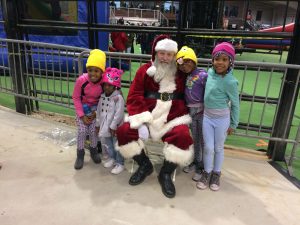 The Mission of Helping Hands Holiday Dinner is to make the holiday season happier for those in need. In December 1990, a traditional turkey dinner, and a visit from Santa, thrilled 350 people. This fulfilled a dream that Drs. Louis and Lori Okun both shared, to provide for those less fortunate during the holiday season. Annually the program has grown, until the numbers became so large that a new location was found at Henderson’s Arena in College Park, GA. By moving, more space was allocated for carnival events such as moon bounces, face painting, arts and crafts, rock climbing, and special shows. To compliment the atmosphere, the food changed also to hamburgers, hot dogs, and nachos.

By 1996 over 10,000 people were served. Funds and toys are provided by Fulton Co. and Toys for Tots, as well as local businesses, civic groups, and churches.

Font Resize
Contrast
Accessibility by WAH
Call Us Text Us